Once upon a time, Matt Drudge of the DrudgeReport.com was a huge Trump supporter. He supported Trump's crackdown on the deep state and truly believed in our President's message of economic prosperity and making America great again.

Sadly, Drudge has gone full Anti-Trump over the past few months, and now he's even posting flat out FAKE NEWS about President Trump.

On Sunday evening, Drudge posted this screaming headline front and center on his website: 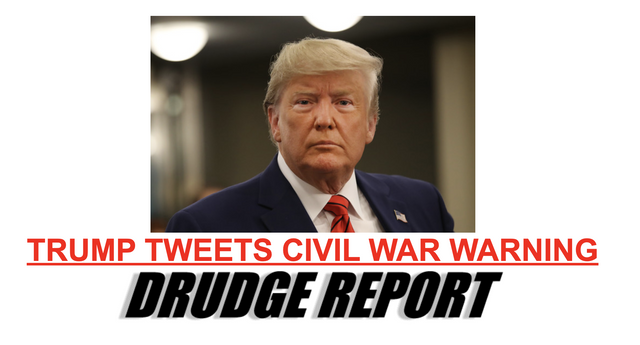 Yes, Matt Drudge accused the President of tweeting about "Civil War' in America.

However, when we take a look at Trump's actual tweet, we can see that Drudge has is openly lying about what Trump said.

Here's the original tweet from the President, in which he is quoting a pastor's remarks about the impeachment chaos happening in Washington D.C.:

....If the Democrats are successful in removing the President from office (which they will never be), it will cause a Civil War like fracture in this Nation from which our Country will never heal.” Pastor Robert Jeffress, @FoxNews

"...it will cause a Civil War LIKE fracture in this nation" (emphasis added)

Is the media too stupid to know what a comparison is? Trump never said there would be a Civil War.

He is quoting a pastor who said that a phony impeachment would cause a division in our nation that is similar to the division that the Civil War caused.

What is so hard to understand about this, folks? Why does he feel the need to openly lie?

Sadly, Matt Drudge doesn't give a damn about the truth anymore. He posts these screaming headlines because it get clicks and makes him a TON of money.

Now, "Civil War" is the #1 trending term on Twitter, because Democrats are complete idiots and Drudge is just playing along.

Drudge no longer cares about the health of our nation, he only cares about being as sensational as possible so he can continue to line his pockets with cash.

What is your response to Drudge's turn to the dark side? Let us know...

Biden: I Would Like Michelle Obama to be my Vice President

Dershowitz Lists Every President That Would Be Impeached by Dems' Standards

We Need Your Signature!

Biden: I Would Like Michelle Obama to be my Vice President

Dershowitz Lists Every President That Would Be Impeached by Dems' Standards