New York City mayor Bill de Blasio has proven the old adage that “if you scratch a socialist, you’ll find a communist.”

On Monday, the unpopular mayor issued a new decree based on a public health emergency that has effectively passed. New York City private businesses are now required to violate the health privacy of customers by demanding they show COVID vaccine documentation to enter their establishments.

The COVID “passport” decree will apply to restaurants, gyms and performances. The New York Times “reported” on the rights-infringing decree.

“The program, similar to mandates issued in France and Italy last month, will start on Aug. 16, and after a transition period, enforcement will begin on Sept. 13, when schools are expected to reopen and more workers could return to offices in Manhattan,” the Times reported. “Mr. de Blasio has been moving aggressively to get more New Yorkers vaccinated to curtail a third wave of coronavirus cases amid concern about the spread of the Delta variant. He is also requiring city workers to get vaccinated or to face weekly testing, and he has offered a $100 incentive for the public.”

“If you want to participate in our society fully, you’ve got to get vaccinated,” de Blasio at a news conference. “It’s time.”

“This is going to be a requirement,” he added. “The only way to patronize these establishments is if you are vaccinated, at least one dose. The same for folks in terms of work, they will need at least one dose,” he said.

“We’ve got to shake people at this point and say ‘c’mon now,’” he said. “We tried voluntary. We could not have been more kind and compassionate as a country…free testing, incentives, friendly warm embrace — the voluntary phase is over.”

De Blasio recently made headlines by going against the grain of the Democratic Party and pronouncing that he didn’t believe mask mandates would again be necessary.

“Let’s address the problem by getting more people vaccinated, and going right at it and knocking down this variant,” he said. “You know, a mask doesn’t arrest the progress of the variant. Vaccination does.”

On Monday, de Blasio said he’s requiring the entire municipal workforce to get vaccinated or start weekly testing by September 13. The mayor’s mandate will cover a total of 340,000 employees in the school system, police, and fire departments.

The Delta variant is the last gasp of a pandemic that has effectively passed. COVID vaccines have not been proven to stop transmissibility; indeed, the CDC recently conceded that the fully vaccinated can spread the Delta variant.

“The U.S. Centers for Disease Control and Prevention says the delta variant of the coronavirus is as contagious as chickenpox and that infections in vaccinated people may be as transmissible as in the unvaccinated,” VOA reported.

Therefore, vaccines only effectively limit the severity of the disease. It is entirely a matter of personal risk and choice that has mutated into a ‘public health’ issue. New York City’s vaccination rate stands at 60%, which is about 10% short of the vaccination threshold needed to effectively halt virus transmissibility.

However, there have been over 2 million cases reported in New York City, meaning that millions of people have superior, longer term immunity to COVID. That immunity is reflected in the COVID rates for New York City. 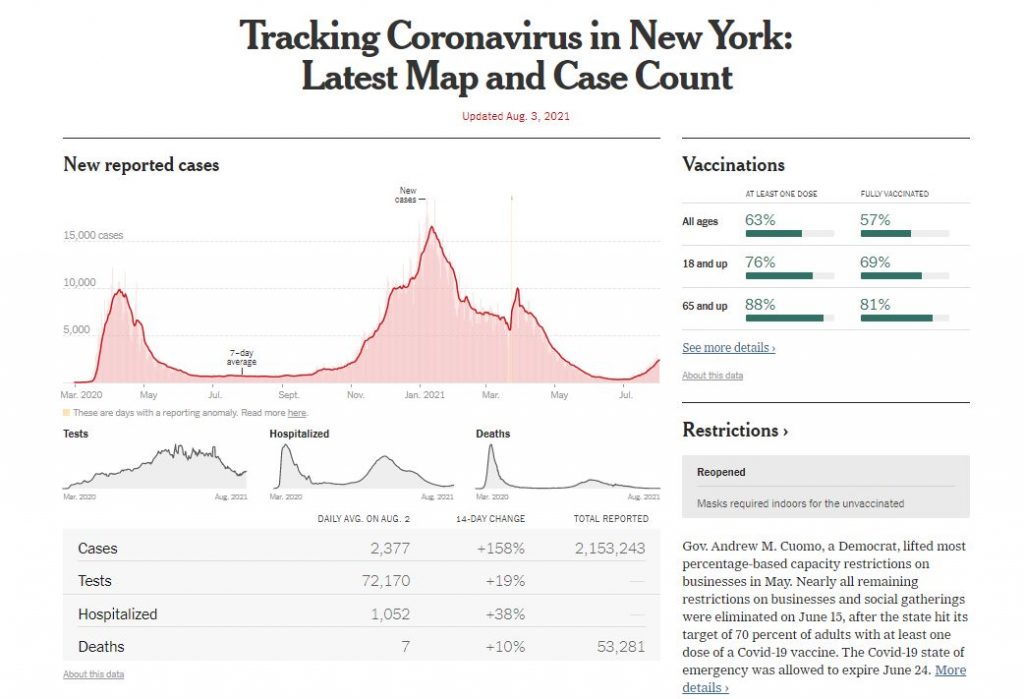 COVID deaths are only up modestly in New York City, due in part to the Delta variant being a far less deadly strain than that original. 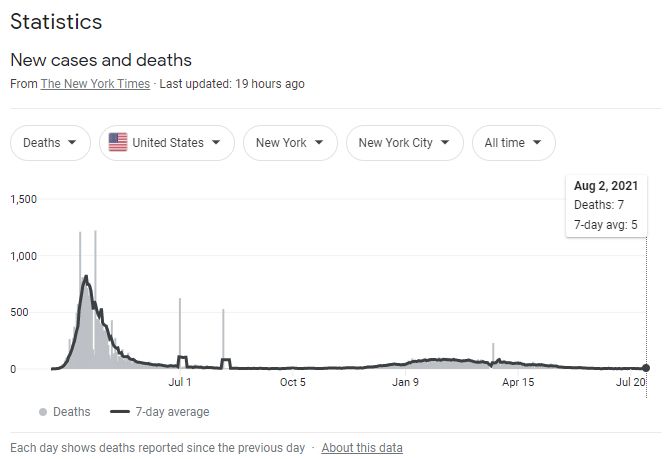 The 7-day average of COVID-related deaths for New York City stands at 5 people. There are approximately 8.5 million people in New York City.