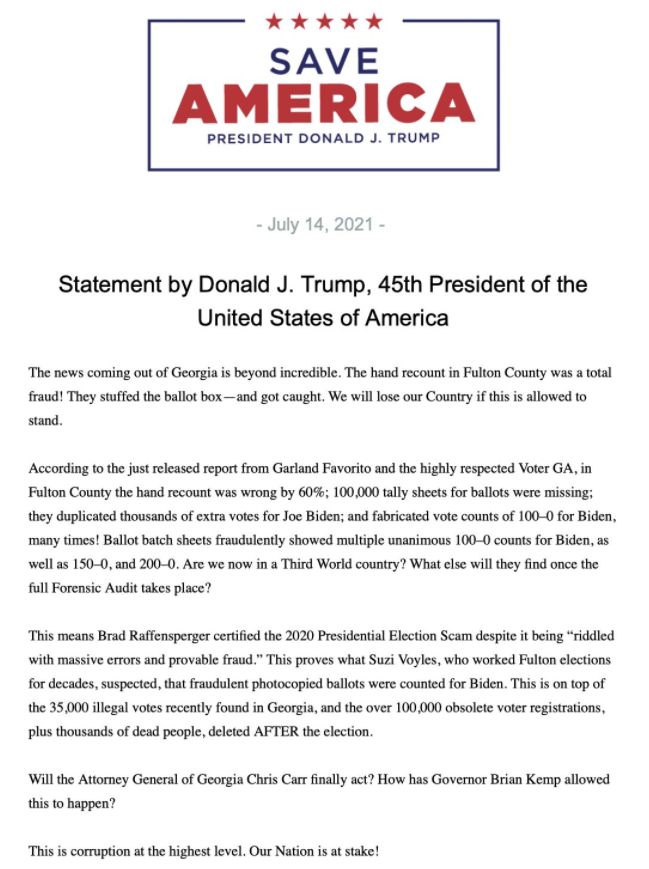 “The news coming out of Georgia is beyond incredible. The hand recount in Fulton County was a total fraud! They stuffed the ballot box—and got caught. We will lose our Country if this is allowed to stand.”

“According to the just released report from Garland Favorito and the highly respected Voter GA, in Fulton County the hand recount was wrong by 60%; 100,000 tally sheets for ballots were missing; they duplicated thousands of extra votes for Joe Biden; and fabricated vote counts of 100-0 for Biden, many times!”

“Ballot batch sheets fraudulently showed multiple unanimous 100-0 counts for Biden, as well as 150-0, and 200-0,” he went on. “Are we now in a Third World country? What else will they find once the full Forensic Audit takes place?”

“This means Brad Raffensperfer certified the 2020 Presidential Election Scam despite it being ‘riddled with massive errors and provable fraud’,” Trump continued. “This proves what Suzi Voyles, who worked Fulton elections for decades, suspected, that fraudulent photocopied ballots were counted for Biden. This is on top of the 35,000 illegal votes recently found in Georgia, and the over 100,000 obsolete voter registrations, plus thousands of dead people, deleted AFTER the election.”

“Will the Attorney Generla of Georgia Chris Carr finally act?” he asked. “How has Governor Brian Kemp allowed this to happen?”

“This is corruption at the highest level,” Trump concluded. “Our Nation is at stake!”

The forensic auditing team walked people through the double-counted ballots from the 2020 election in a video release.

The ballots scanned were identically marked in their entirety. The issue with double-ballot counting is that it circumstantially corroborates video-recorded evidence that appears to show Fulton County election workers running stacks of ballots through tabulators.

A video recording taken at State Farm Arena late election night showed election workers dragging out boxes of ballots from under a table after election observers were wrongfully sent home early. Then they ran stacks of ballots through tabulators multiple times for unknown reasons.

Contrary to widespread media myths, as the Federalist’s Mollie Hemingway rightly pointed out, the State Farm vote-counting video has not been “debunked.”

After the release of thousands of ballot images under a Georgia state law that has made them available to the public, the mainstream media has finally conceded that hundreds of double-scanned ballots were cast in Fulton County in the 2020 election.

“The discovery of identical ballots provides evidence to back up allegations of problems in the presidential election, but on a relatively small scale that had no bearing on the final certified count,” AJC baselessly claims. “A group of voters seeking to prove the election was fraudulent say double-counting is just the beginning of what they hope to find.”

“Double-counted ballots were discovered by voters suing Fulton in an effort to persuade a judge to allow them to conduct an in-depth inspection of 147,000 absentee ballots,” the report continued. “The judge ruled against the plaintiffs last month, but the case survived with new claims filed against the county’s five election board members.”

AJC reported it could only find 27 votes double-cast for Biden in Fulton County, but independent audit investigators claim to have found more examples of election fraud.

“If we’re finding this in Fulton County, we’re probably going to find it throughout the state. The question is, why did it happen?” said David Cross, who is working with the plaintiffs. “The simple fact that it happened and we found it here means that it probably occurred elsewhere.”

FULTON COUNTY, GA: 🚨🚨🚨 More evidence from @VoterGa shows audit tally sheets were marked entirely for @JoeBiden despite having votes for Donald Trump and Jo Jorgensen in those batches. Must watch! @RealAmVoice pic.twitter.com/RPOBsCON7Q

“More evidence from VoterGa shows audit tally sheets were marked entirely for Joe Biden despite having votes for Donald Trump and Jo Jorgensen in those batches,” Mullins said. “Must watch!”

The difference in the Georgia election statewide was a mere 12,000 votes. Fulton County went overwhelmingly for Biden: 73% of the total vote and 79% of absentee ballots.

Tucker Carlson is also about to announce what he claims is new evidence of “voter fraud” in the 2020 election. The news was reported by the Washington Examiner’s Deputy Editor Daniel Chaitin.

Tucker Carlson will reportedly be doing an Election Fraud “special” on Wednesday. The new evidence would add to numerous discovered issues with Fulton County election.