The FBI’s Mar-a-Lago raid has been heralded by anti-Trump media as the ‘scandal-to-end-all-scandals.’ The nail-in-the-coffin. The ‘big one’ that will end Trump’s chances of becoming president ever again.

So, imagine the media’s surprise when many of the “classified” documents that were procured by the former sitting president for his official business — including those ‘top secret’ documents pictured in the FBI’s staged photo released to interfere in the U.S. elections — were merely folders… that were empty.

The FBI’s unsealed Mar-a-Lago photo now appears like a smoking gun case of “election interference.” It intentionally misled Americans to believe that those folders contained ‘top secret’ documents that were obscured by ‘cover sheets.’ 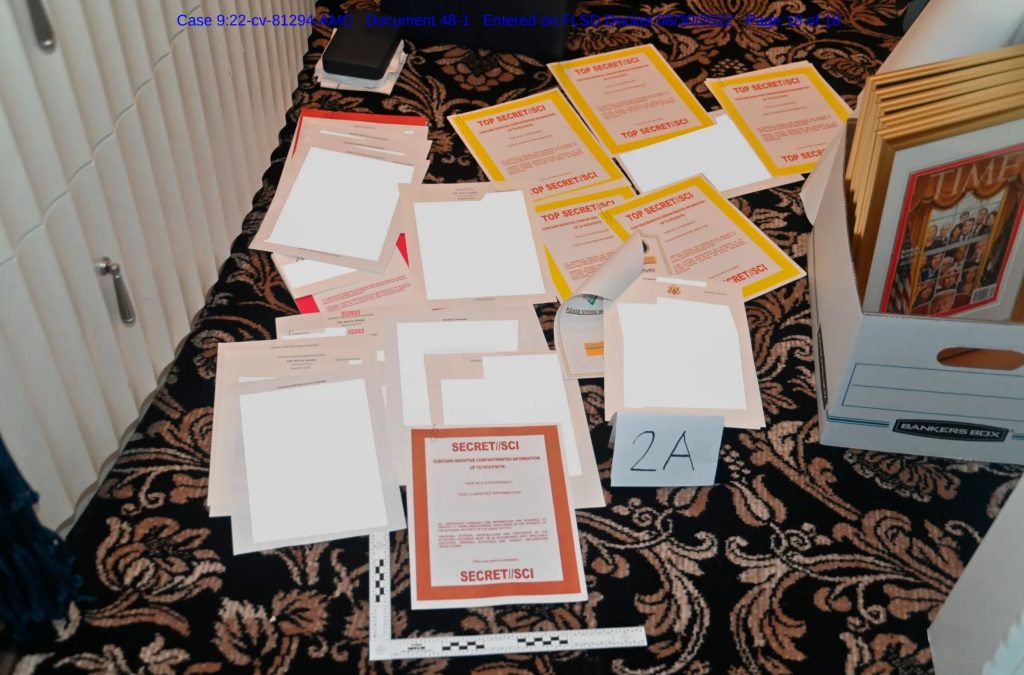 “The FBI recovered more than 11,000 government documents and photographs during its Aug. 8 search at former President Donald Trump’s Florida estate, as well as 48 empty folders labeled as “classified,” according to court records that were unsealed on Friday,” Reuters reported.

“The unsealing by U.S. District Judge Aileen Cannon in West Palm Beach came one day after she heard oral arguments by Trump’s attorneys and the Justice Department’s top two counterintelligence prosecutors over whether she should appoint a special master to conduct a privilege review of the seized materials at Trump’s request,” the report added.

This is hardly the ‘scandal of the century.’ But that hasn’t stopped the apoplectic mainstream media from recklessly speculating about what happened to the documents that were in the folders.

Andrew Weissmann, also known as Mueller’s “pit bull,” tweeted, “It’s the empty classified folders that are of most concern. Where are the contents?”

It should be noted that Jay Bratt, who has been leading the FBI’s counter-intelligence investigation into the Mar-a-Lago documents, is a long-time associate of Weissmann.

But buried in the USA Today article is a heavy dose of cold water about the hyperbolic speculation.

“Another former White House information security official, John Fitzpatrick, said the search warrant receipt does not contain enough information to determine whether or not classified documents are missing,” the report conceded.

“The document is prepared to reflect the dry, objective protocols of evidence gathering. The descriptions are plain and avoid conclusions that may be debated in a litigation later,” said Fitzpatrick, a former senior director for records access and information security management at the National Security Council under Obama.

So, despite all the noise about the “classified” documents, President Donald Trump has both ultimate declassification authority, and his possession of the documents themselves is not in immediate legal dispute.

However, the New York Times appears to concede that the classification status of the documents may not be a legal issue, according to the search warrant affidavit.

No documentation has come to light confirming that Mr. Trump declassified the material, and the potential crimes cited by the Justice Department in seeking the search warrant for Mar-a-Lago would not hinge on the classification status of the documents.

The Wall Street Journal, in a recent editorial on the matter, corroborates the New York Times’ tacit concession that there is no ‘there, there’ in terms of Donald Trump having allegedly committed a crime affecting national security.

Nothing in the PRA suggests that the former president’s physical custody of his records can be considered unlawful under the statutes on which the Mar-a-Lago warrant is based. Yet the statute’s text makes clear that Congress considered how certain criminal-law provisions would interact with the PRA: It provides that the archivist is not to make materials available to the former president’s designated representative “if that individual has been convicted of a crime relating to the review, retention, removal, or destruction of records of the Archives.”

Nothing is said about the former president himself, but applying these general criminal statutes to him based on his mere possession of records would vitiate the entire carefully balanced PRA statutory scheme. Thus if the Justice Department’s sole complaint is that Mr. Trump had in his possession presidential records he took with him from the White House, he should be in the clear, even if some of those records are classified.

The Supreme Court has strongly backed presidential classification authority, such as in Department of Navy vs. Egan.

It was recently reported that the Department of Justice is unlikely to bring criminal charges against Donald Trump before the midterm elections, according to a Bloomberg report citing sources familiar with the Mar-a-Lago documents investigation.

“Federal prosecutors are likely to wait until after the November election to announce any charges against Donald Trump, if they determine he broke laws, according to people familiar,” the report stated

Here’s an appetizing thought: If the DOJ gets a criminal indictment on Trump over the Mar-a-Lago documents, his legal team will be entitled to discovery of any correspondence between the Biden White House and the DOJ, FBI, and National Archives.

Barring some unforeseen development in this case, it appears that Donald Trump’s enemies have been outmaneuvered again.