Life can have a delicious sense of irony. After Rep. Alexandria Ocasio-Cortez fled the authoritarian, Covid-ravaged doldrums of the failed state of New York to vacation in sunny, mandate-free Desantistan, it was only a matter of time that her hypocrisy would be exposed.

It turns out that double-vaxxed and boosted AOC has gotten herself a bout of Covid-19. Lo and behold:

Now, it should be noted that AOC is not at risk from Omicron. And even if she were, she’s got the vax, right? She shouldn’t be able to get infected or spread the disease, remember? So it’s hilarious because reality and the narrative are simultaneously coexisting in the Covid-infected person of AOC.

It is vital that we understand why this is such a monumental tribute to the utterly phony narratives put out by the radical Democratic Party about Covid from day one.

The maskless diva partied the night away at a drag queen event in Miami. She hugged and was kissed by Broadway actor Billy Porter, who by her own accounts is not her boyfriend. (That would be the pasty guy with the bad feet she was caught brunching with in Miami initially.)

Here she is with Porter at a “drag brunch” in some pics posted on Instagram: 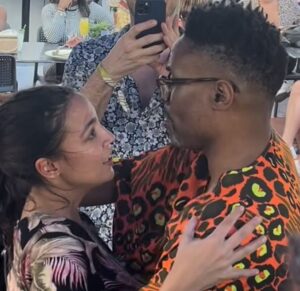 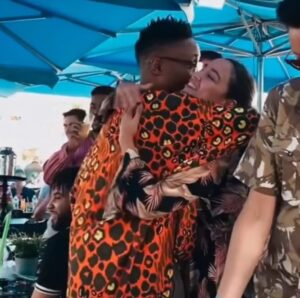 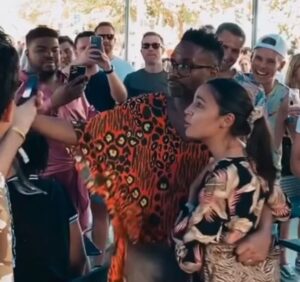 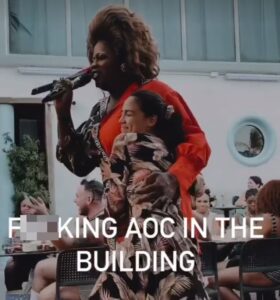 The social media reaction to the images of the Woke icon sums it all up.

“AOC is STILL lounging it up in Florida, in large crowds and maskless. This time at a Drag Queen bar in Miami. Rules for thee but not for me,” wrote journalist Brendon Leslie.

“For those of you with zero sense of humor: the whole point of this post is to expose hypocrisy,” he added. “We don’t actually care she’s maskless. We care she fear mongers about Florida but then has the audacity to vacation here.”

But the greatest response was assuredly from Florida’s governor Ron DeSantis.

“If I had a dollar for every lockdown politician who decided to escape to Florida over the last two years, I’d be a pretty dog-gone wealthy man, let me tell ya,” DeSantis said at a press conference.

“I mean, Congress people, mayors, governors, I mean, you name it. It’s interesting though, the reception that some of these folks will get in Florida,” he continued. “Because I think a lot of Floridians will say ‘Wait a minute, you’re bashing us because we’re not doing your draconian policies, and yet we’re the first place you want to flee to to basically to be able to enjoy life. And so I’m not surprised to see that continue to happen.”

“Without naming names,” DeSantis said, “I could tell you, I mean, there probably be about half a dozen governors who had restrictions on their people and then were spotted at various points in Florida. Some of it’s been public. Some of it’s not been public.”

Making things even funnier, AOC lashed out at those ridiculing her by proclaiming that they only wanted to “date her.”

That’s because on New Year’s Eve, the notorious AOC lashed out with one of the most bizarre tirades in recent Twitter memory.

To kick things off, AOC claimed that Ron DeSantis was “missing” in Florida.

Hasn’t Gov. DeSantis been inexplicably missing for like 2 weeks?

If he’s around, I would be happy to say hello. His social media team seems to have been posting old photos for weeks.

In the meantime, perhaps I could help with local organizing. Folks are quite receptive here 🙂 https://t.co/LmmqT8eLDh

“Hasn’t Gov. DeSantis been inexplicably missing for like 2 weeks?” AOC claimed. “If he’s around, I would be happy to say hello. His social media team seems to have been posting old photos for weeks. In the meantime, perhaps I could help with local organizing. Folks are quite receptive here.”

Then it came out that DeSantis was actually helping his wife get through cancer treatment. Oof.

The temper tantrum was just beginning, however.

It’s starting to get old ignoring the very obvious, strange, and deranged sexual frustrations that underpin the Republican fixation on me, women,& LGBT+ people in general.

These people clearly need therapy, won’t do it, and use politics as their outlet instead. It’s really weird

“If Republicans are mad they can’t date me they can just say that instead of projecting their sexual frustrations onto my boyfriend’s feet,’ she said in response to jokes about her boyfriend’s feet. “Ya creepy weirdos.”

“It’s starting to get old ignoring the very obvious, strange, and deranged sexual frustrations that underpin the Republican fixation on me, women,& LGBT+ people in general,” she railed on. “These people clearly need therapy, won’t do it, and use politics as their outlet instead. It’s really weird.”

This has to go down as one of the most unserious responses to criticism from any election official in history. Now, she is going to have to take her medicine. That means NyQuil and a lot of rest until the lame excuses to drag out the pointless Covid policies are finally put to bed.