Former President Donald Trump was speaking during the American Freedom Tour when he openly mocked President Joe Biden’s failures in the White House. At one point Trump then mocked Biden falling off a bike, saying he hopes he’s OK, but then pledged to Americans that he will “never, ever ride a bicycle.” The audience laughed and it was caught on video.

The video of Joe Biden falling off a bike took the Internet by storm after someone caught him falling during a ride in Delaware.

Fox News had the story: “I’m good,” he said appearing in good spirits when immediately asked if he was OK.

In a statement to Fox News a White House official said, “The President said, his foot got caught on the pedal while dismounting and he is fine. No medical attention is needed.

“The President looks forward to spending the rest of the day with his family,” the official added.

Following his tumble, Biden bent down to greet a child who was waiting along the president’s route in Rehoboth Beach and asked him what it’s like to run the country.

“Oh it’s like any other job,” Biden joked. “Some parts are hard.”

The president then took a photo with the girl who said one day she planned to become president.” 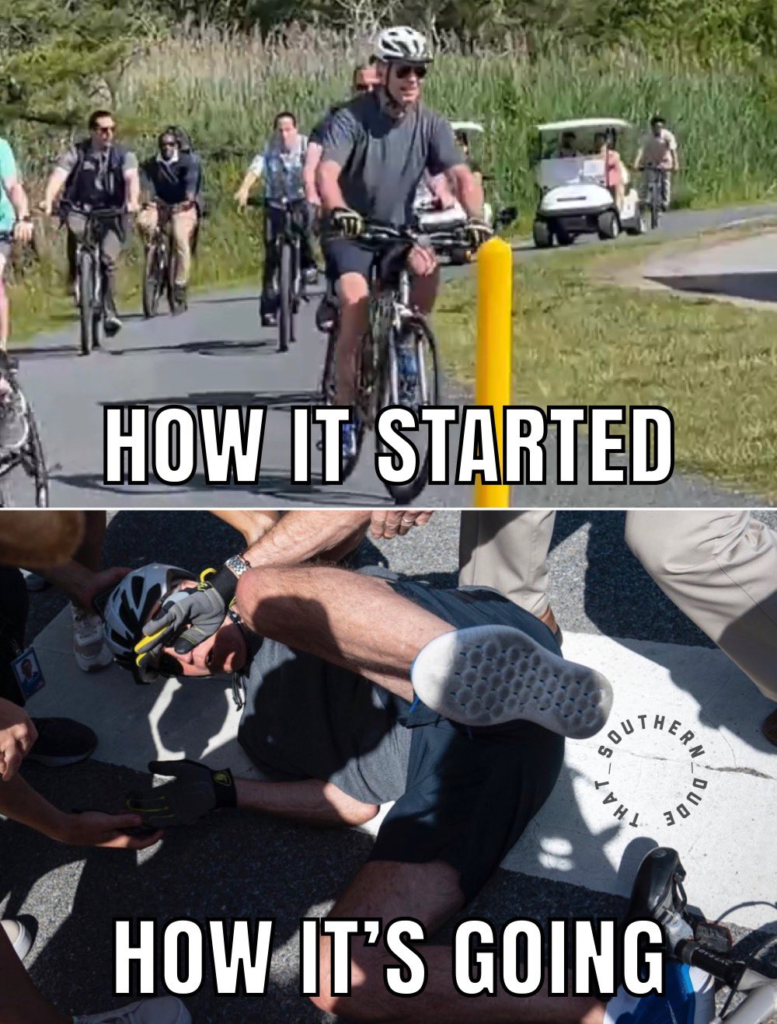 On the same trip in Delaware, Biden was seen scolding a reporter on video.

A beach-strolling President Biden lashed out at a reporter, as Americans struggle to keep their heads above water amid inflation-fueled price hikes, for daring to ask about the possibility of a US recession.

Near his vacation home in Rehoboth Beach, Del., Biden was asked on the sand about economic experts “saying a recession is more likely than ever,” he barked: “Not! The majority of them aren’t saying that. Come on, don’t make things up, OK?”

“Now you sound like a Republican politician,” the president griped, before realizing how he came off and insisting, “I’m joking. That was a joke.”

Two days after falling off his bike nearby, the president emerged and proceeded to call for higher taxes on the wealthy while blaming oil companies for record-high prices at the pump.

“But all kidding aside, no, I don’t think it is [inevitable]. I was talking to [former Treasury Secretary] Larry Summers this morning and there’s nothing inevitable about a recession,” Biden said.

Bide also said on the beach that he may make a decision this week on whether to ask Congress to waive the federal gas tax of 18.3 cents per gallon.

“Yes I’m considering it. I hope I have a decision based on the data I’m looking for by the end of the week,” said the president, whose poll numbers have hit new lows due to frustration about the highest inflation since 1981.

Other polls show dozens of Democrats would rather have someone besides Joe Biden.

Previously, Biden has released millions of gallons of oil from the strategic reserve and allowed a higher proportion of ethanol in gasoline over the summer. However, neither step has arrested rising gas prices caused in part by the Russian invasion of Ukraine.

According to AAA, the nationwide average price of a gallon of regular gas stood at $4.98, down slightly from the high of $5.016 recorded June 14.

“We also can move in a direction that we can provide for tax — increasing taxes on those in the corporate area as well as individuals as it relates to [former President Donald] Trump’s tax cut, which is inflationary. You know, going out and buying a yacht doesn’t help the economy a whole lot,” Biden said.

“We have a chance here to make a fundamental turn toward renewable energy, electric vehicles, and not just luxury vehicles, but across the board. And that’s something we should be — my team is going to be sitting down with the CEOs of the major oil companies this week … starting an explanation of how they justify making $35 billion in the first quarter,” said Biden.

“Are you planning to sit down with oil and gas CEOs?” a reporter asked.

“Because my team is going to do that,” Biden answered, despite the fact that he regularly meets with company CEOs to discuss product supply issues.

Biden was telling people to act on crime and gun violence and that both parties should ‘step up’, President Joe Biden said that, but then he ate his own words because he actually fell UP the stairs while boarding Air Force One to fly to California.

This story syndicated with permission from Frank at Crankers.com