Vice President Kamala Harris had one job (maybe two — if you count doing something about the border crisis).

Joe Biden had entrusted her as Vice President and the President of the Senate with the deciding vote on evenly split legislation to rescue the Democrats’ federal elections takeover bill, known euphemistically in the press as the ‘voting rights’ bill.

She failed at both. On Wednesday night, Harris had the dishonor of watching the bill go down in flames.

“History is going to record and watch certainly the votes that are taking place,” Harris pleaded. “This is about the fundamental freedom to vote and what should be an unfettered access to the ballot.”

She nonetheless watched the Senate votes stream in. It became apparent that the radical Democrats would not be able to get the 60 votes they needed to advance the bill.

“The final tally on limiting debate on an election reform bill that Democrats say is necessary to preserve the right to vote in the United States was 49-51,” Reuters added. “No Republicans voted to advance the legislation.”

It is interesting why the bill was defeated 49-51. Senate Majority Leader Chuck Schumer actually changed his vote against it, which is a procedural trick that allows him to bring it back up for consideration.

A defeated Kamala Harris then delivered the news that the election takeover bill was dead. Watch:

Promptly after announcing the defeat of the Senate bill, and therefore driving a stake in the Biden agenda, Kamala Harris promptly left. 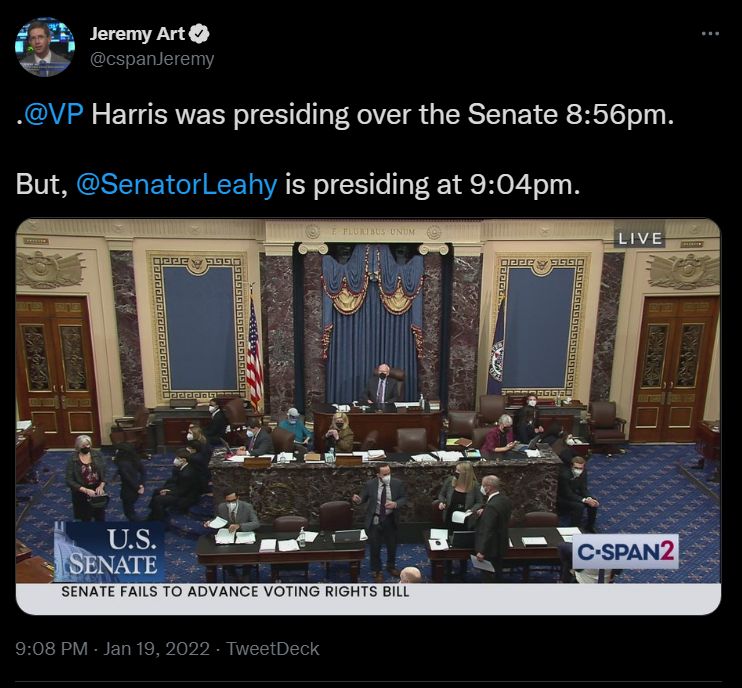 The Senate then was presided over by Senator Patrick Leahy of Vermont. Harris had turned tail and vanished without a trace.

The Democrats were not done fighting, however. They promptly launched an all-out assault on the Senate filibuster, which was defended by Senate Minority Leader Mitch McConnell (R-KY), along with Democratic Senator Joe Manchin of West Virginia.

The voting rights bill is defeated. Kamala Harris’s work in the Senate is done.