President Joe Biden could not be more of an ‘unholy fool’ on his foreign trip overseas to Rome and the G20 summit. When he isn’t babbling to the Pope about African-American baseball players or joking about the pontiff’s age, he is cavorting around in childlike fashion amongst the world’s most powerful leaders.

When in Rome at the photo session with world leaders, Biden is frolicking and playing the jokester, while fidgeting as if he can’t stay still. There is nothing about “President” Biden that projects power or dignity – indeed, it almost seems to be intentional to act without presidential bearing.

Joe Biden during the #G20RomeSummit photo session with the world leaders. pic.twitter.com/zmjrRymazy

Biden was in his usually chummy mood at the summit – while Americans face numerous serious crises at home. It should be noted that many world leaders skipped out on the in-person G20 events.

In the world leaders’ photo, you can see Biden standing way off to the side by himself. He is almost out of the picture. 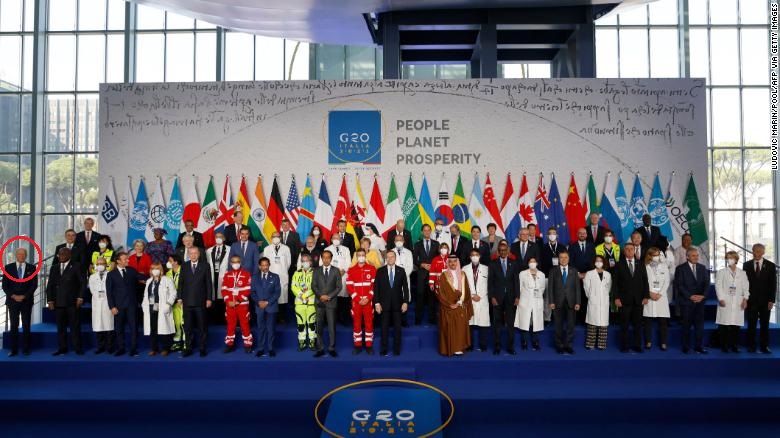 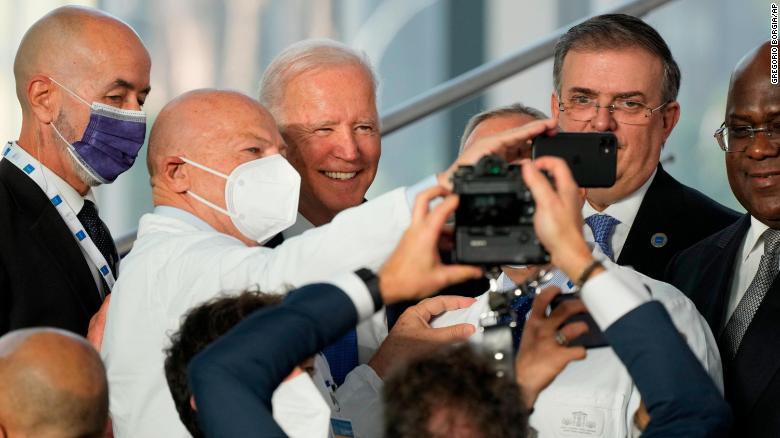 Biden greeted more world leaders. No social distancing. Not a mask in sight, despite it being indoors and these leaders being from all over the planet.

I had a productive first day of meetings in Rome. Looking forward to the start of the G20 tomorrow. pic.twitter.com/vnGbCAgf5E

On Thursday, Joe Biden met with the Pope, and it was extraordinarily odd, to say the least.

“You’re the famous African-American baseball player in America,” Biden can be heard saying while talking about baseball legend Satchel Paige.

The fuller context can be watched below:

Biden may have meant it as a joke or it was another slip of the tongue about the gift he handed him, but the Pope laughing shows this is what he said. This is not the behavior of a serious person, let alone one of the two ‘most powerful Catholics’ in the world.

The topic of abortion was not discussed during the meeting, Biden told reporters on Friday. The meeting came as U.S. Catholic bishops are debating whether Biden should be denied communion over his views on abortion.

“No, it didn’t,” he said when asked if abortion came up. “We just talked about the fact that he was happy that I was a good Catholic and … keep receiving communion.”

When asked if the pope said he should keep receiving communion, the president replied, “yes.” Biden also said the pope blessed his rosary, but he did not take communion with the pope, the Hill reported.

As reported on Thursday, the Pope suddenly canceled a live broadcast with the U.S. president without providing an explanation: The Washington Post reported on the odd occurrence:

The Vatican press office provided no explanation for why the live broadcast of Biden’s visit had been trimmed to cover just the arrival of the president’s motorcade in the courtyard of the Apostolic Palace, where a Vatican monsignor will greet him.

Cancelled was any live coverage of Biden actually greeting Francis in the palace Throne Room, as well as the live footage of the two men sitting down to begin their private talks in Francis’ library, at which time the cameras normally would have stopped running.

This isn’t the first time Biden has gone to a world summit and genuinely looked clueless. In June, Biden went to the G7 and got lost.

Joe Biden seems to get lost at the G7 summit in England, Jill comes to the rescue @JoeBiden @G7 @FLOTUS @USAmbUK pic.twitter.com/GFxGouRCoA

Biden answered a quick question from a reporter, then his wife Jill Biden came to the rescue. You can hear a loud outburst of laughs, although Biden didn’t make any joke.

When it comes to Joe Biden, some things never change. Unfortunately, the United States cannot rely on its president to provide strong leadership at a time when it really needs it. Many Americans would trade all the Trump ‘mean tweets’ in the world right now for a president who actually knows how to lead.