The elderly, disabled woman reported by some journalists to have been killed in a Freedom Convoy protest in Ottawa after a police horse trampled her is fortunately alive. But she does have injuries (her name is being withheld to protect her privacy). 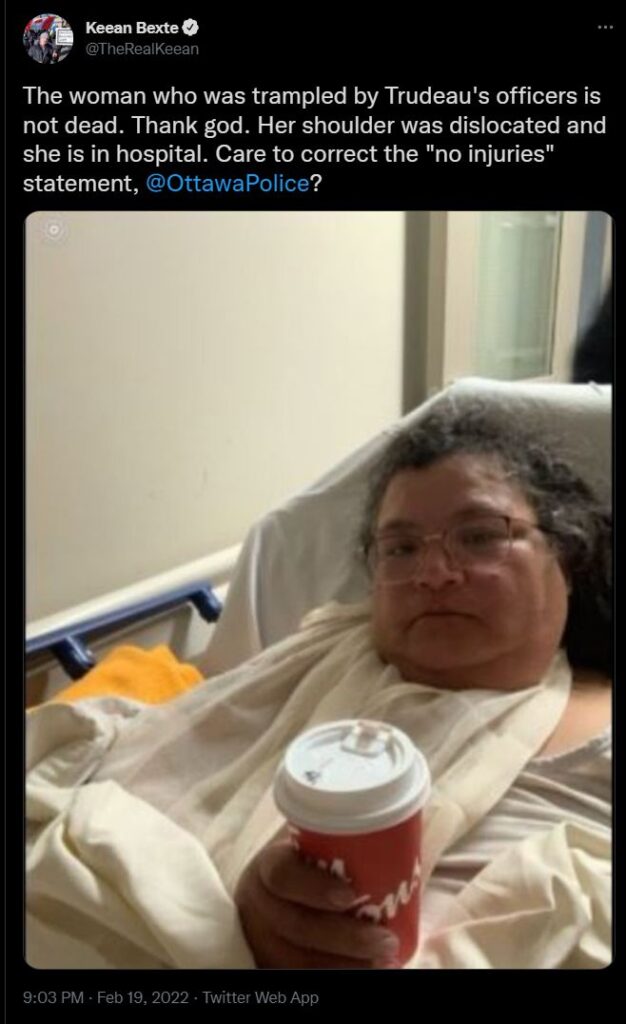 “The woman who was trampled by Trudeau’s officers is not dead. Thank god. Her shoulder was dislocated and she is in hospital. Care to correct the “no injuries” statement, @OttawaPolice?” journalist Keean Bexte asked on Twitter.

The woman was believed to be dead after harrowing video captured her being trampled by a horse on Friday night.

This is disturbing. Is the woman with the walker trampled by Mounted Unit horses alive? Is she in surgery? Has ⁦@SIUOntario⁩ been notified? Do you have any concerns or comment ⁦@OttawaPolice⁩ ⁦@JustinTrudeau⁩ ⁦@fordnation⁩ ⁦@JimWatsonOttawa⁩ – Why? pic.twitter.com/X251vZiIaq

The Ottawa Police claimed that the woman threw her “bike” at law enforcement.

As this was happening a bicycle was thrown at the feet of one of the horses in an attempt to injure it. One person was arrested for intentionally harming a police service animal.

However, video shows that it was a disability scooter and it had nothing to do with the incident.

Police in Ottawa trampled protesters and then proceeded to defame the lady trampled by saying she threw her “bike” (disability scooter) at the horses. pic.twitter.com/yVj5P6tqrc

This is a closer look at the mobility scooter.

Ottawa police are claiming one of the trampled protesters was on a bike. Does this look like a bike or walking aid to you? pic.twitter.com/BYPMkLwXrI

Ottawa Police have also falsely claimed that no one was seriously injured.

“We are a peaceful protest,” the elderly woman is heard saying shortly before the incident.

Elderly woman gets trampled by police attack horses after she tells the police she is there for her children and grandchildren and wishes nothing but peace. #TrudeauTyranny#TruckersForFreedom pic.twitter.com/vksBbUY7Q0

She was also seen on video saying that she was at the peaceful protest for her children and grandchildren and her only agenda was to spread “peace, love and happiness.”

It turns out the Ottawa Police had other plans.

The elderly woman is now etched in the history books as someone whose personal sacrifice provides the defining moment of the Ottawa protests. Now is the critical juncture for Canadians to decide if they will choose more oppression or to stand up for their rights and freedoms.

This photo should be how history remembers @JustinTrudeau’s supposedly inclusive and sweet-as-pie ‘for your own good’ Canada – a disabled woman lying on the ground beside her mobility scooter, trampled under the hooves of a police horse pic.twitter.com/PkbXhdF4PW