Politico Playbook ran an unwise story about the “wise Latina” Justice Sotomayor purportedly dining with Democratic heavyweights after one of the most ridiculous, fact-free performances by any Supreme Court Justice in U.S. history.

The photo that purportedly showed Sotomayor dining with Nancy Pelosi and Chuck Schumer is shown below. 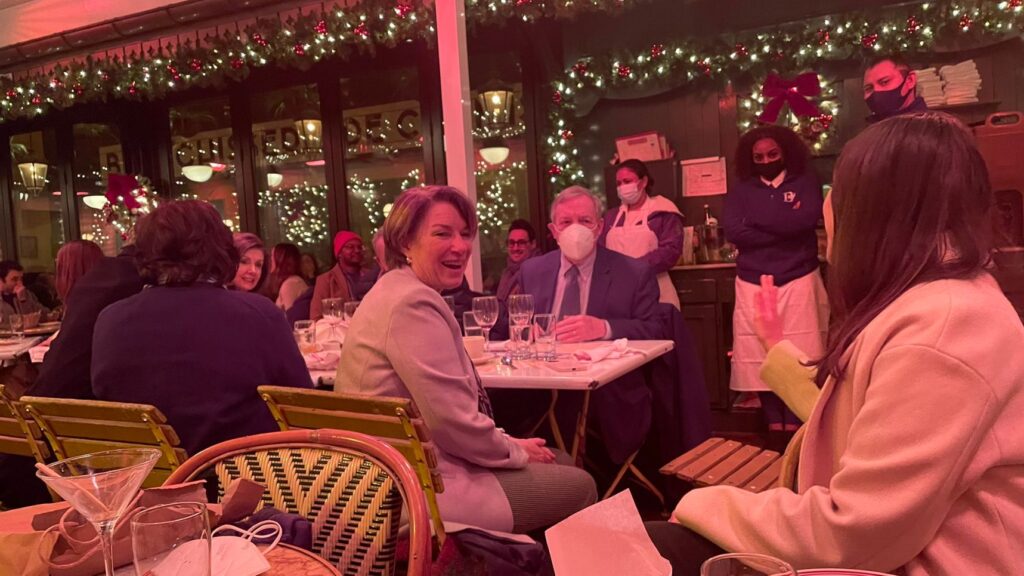 “CORRECTION: The original version of this item misidentified Iris Weinshall, the wife of Chuck Schumer, as Sonia Sotomayor. Our tipster got it wrong, but we should have double checked,” the Playbook noted.

Although the judicial clown would have fit in perfectly with the three-ring circus of Speaker Nancy Pelosi and Senate Majority Leader Chuck Schumer, alas it was not meant to be. But Playbook even botched the correction on Twitter.

CORRECTION: This morning's Playbook had a photo of a Friday dinner at Le Diplomate, and misidentified Iris Schumer, the majority leader’s wife, as Sonia Sotomayor.

Our tipster got it wrong, but we should have double checked. We deeply regret the error. https://t.co/66NFBPld08

“CORRECTION: This morning’s Playbook had a photo of a Friday dinner at Le Diplomate, and misidentified Iris Schumer, the majority leader’s wife, as Sonia Sotomayor,” the social media account said. “Our tipster got it wrong, but we should have double checked. We deeply regret the error.”

However, Playbook couldn’t put the genie back in the bottle before the entire Twitter universe was buzzing about it. Even a Congressman believed in the false reportage.

After the lies she spat out yesterday, how can she still rule impartial on this case?

She needs to recuse herself NOW!

But as unbelievable as the story turned out to be, it wasn’t nearly as egregious and damaging as the falsehoods that the “wise Latina” spouted during oral arguments over Biden’s OSHA vaccine “mandate.”

The most glaring false claim Sotomayor made is that the “vaccines” stop the spread of Covid-19 — and particularly, the Delta and Omicron variants. This is not even close to being true.

Sotomayor doubled down on deception with an easily disprovable statement on child hospitalizations.

“We have over 100,000 children, which we’ve never had before, in serious condition, and many on ventilators,” she claimed.

Politifact even nailed her for her fact-free claim about child hospitalizations.

NEW: Justice Sonia Sotomayor said during oral arguments today that “we have over 100,000 children, which we’ve never had before, in serious condition, and many on ventilators” due to the coronavirus. That's False. https://t.co/9itoVd1s1L pic.twitter.com/zX8Nf6Bx8r

That’s how bad it was.

How can the American people trust that the Supreme Court of the United States will rule justly on the Biden vaccine mandates when several of the justices seem like they get their false talking points off of MSNBC? These justices would be wise to remember that they were put on the bench only to rule on the “law” and not the “science.”

Maybe these radical judges aren’t literally dining with Democratic leaders after Supreme Court hearings, but as far as the facts are concerned, these justices are ‘out-to-lunch’.