American voters are signaling yet another rejection of the radical Democratic agenda in Biden’s America, based on yet another election night result. Republican Mike Carey has won the special election for the House seat in Ohio’s 15th Congressional District, NBC News projects.

The 2021 election victory would be yet another Trump-endorsed candidate to win a House race.

“The Ohio seat was held for a decade by Republican Steve Stivers, who stepped down in May after voting earlier in the year to impeach Trump on a charge he incited the deadly Jan. 6 assault on the U.S. Capitol,” Reuters noted.

The House victory would cap a strong showing by Republicans on election night and signals a portending red tide coming in the 2022 midterm elections.

The New York Times currently has Youngkin up 9 points with 85% in. However, Fairfax County is yet to report all of its results. It earlier announced delays and that it will ‘rescan’ ballots. McAuliffe is under-performing Biden in the county by about 5 points, based on the early results. 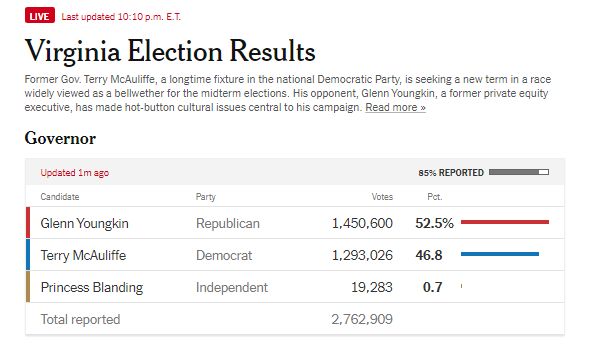 Joe Biden was awarded the Commonwealth of Virginia in the 2020 election with a reported margin of 10 points.

A victory by Glenn Youngkin would be a repudation of the radical Biden agenda. Terry McAuliffe has campaign hard against parents having a say in their children’s education and has pushed extreme vaccine and mask mandates, even for children. 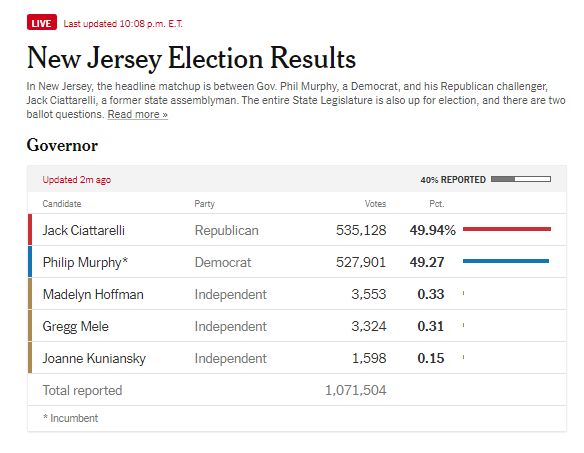 In the 2020 election, Biden won New Jersey by 16 points. Even a close result in the 2021 governor’s race signals that the 2022 midterm elections are setting up to be an absolute bloodbath for the Democratic Party.

It turns out that running against Donald Trump is not paying off for the Democratic Party based on the 2021 election results. Trump earlier endorsed Glenn Youngkin, who is currently in strong position in the Virginia governor’s race.